WIN A PACK OF QUIDDITCH PATCHES!
Courtesy of Bloomsbury Australia, with your purchase of QUIDDITCH THROUGH THE AGES you are entered into the draw to win one of four prize packs of very cool team patches!


• In-store & Online.
• One entry per customer.
• Drawn 16 December 2020.
• Customers must be in Abbey's Rewards (free & quick to join) with email address recorded.
• Winners will be notified by email. 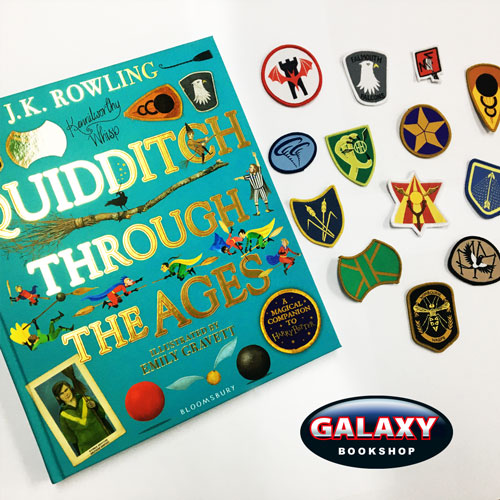 Get ready to learn everything you need to know about the sport at the heart of Hogwarts! Quidditch Through the Ages is the essential companion to the Harry Potter series, a funny, fact-packed fantasy history of the seriously competitive wizarding sport. Bursting with glorious illustrations, magical memorabilia and two super-sized fold-outs, this spectacular new full-colour edition pairs J.K. Rowling's witty, inventive text with Emily Gravett's incredible artistic imagination.
Devoured by Harry Potter in his first year, and consulted on a daily basis by the young witches and wizards at Hogwarts, Quidditch Through the Ages whisks readers on a whistle-stop tour through the game's hilarious (and often foul) history. There's magic and wonder in equal measure for both newcomers to the Wizarding World and established Harry Potter fans.
Packed with trivia, tales of on-pitch antics, and Quidditch stars past and present - this is a great gift for the whole family. Quidditch Through the Ages is published in aid of Lumos, an international children's charity founded in 2005 by J.K. Rowling, and Comic Relief.
By:   J.K. Rowling
Illustrated by:   Emily Gravett
Imprint:   Bloomsbury
Country of Publication:   United Kingdom
Dimensions:   Height: 290mm,  Width: 250mm,
Weight:   1.275kg
ISBN:   9781526608123
ISBN 10:   152660812X
Series:   Harry Potter
Pages:   160
Publication Date:   06 October 2020
Audience:   Children/juvenile ,  English as a second language
Format:   Hardback
Publisher's Status:   Active

J.K. Rowling is best known as the author of the seven Harry Potter books, which were published between 1997 and 2007. The enduringly popular adventures of Harry, Ron and Hermione have gone on to sell over 500 million copies, be translated into over 80 languages and made into eight blockbuster films. Alongside the Harry Potter series, she also wrote three short companion volumes for charity: Quidditch Through the Ages and Fantastic Beasts and Where to Find Them, in aid of Comic Relief and Lumos, and The Tales of Beedle the Bard, in aid of Lumos. J.K. Rowling collaborated with playwright Jack Thorne and director John Tiffany to continue Harry's story in a stage play, Harry Potter and the Cursed Child, which opened in London in 2016 and is now playing in Europe, North America and Australia. In the same year, she made her debut as a screenwriter with the film Fantastic Beasts and Where to Find Them, the first in a series featuring Magizoologist Newt Scamander, which was inspired by the original companion volume. J.K. Rowling has also written a standalone novel, The Casual Vacancy, and is the author of the Strike crime series under the pseudonym Robert Galbraith. Both have been adapted for television. She has received many awards and honours, including an OBE and a Companion of Honour for services to literature and philanthropy. She lives in Scotland with her family. Emily Gravett was born in Brighton. After leaving school with few qualifications, she spent eight years living on the road before taking the BA illustration course at Brighton University. She won the Macmillan Prize for Illustration with her first book, Wolves, which went on to win the Kate Greenaway Medal and the Boston Globe Horn Book Honor Award for Illustration and marked the beginning of an international career creating extraordinary and innovative books for children: Little Mouse's Big Book of Fears won the Kate Greenaway Medal for her a second time. Her own picture books are published in more than 20 languages and she has also collaborated with some of the most creative writers working today including Julia Donaldson, A.F. Harrold, and Matt Haig. She lives in Brighton with her daughter, partner and two rats.

Companions on the Road

How to Fracture a Fairy Tale

The Sea Beast Takes a Lover

How Long 'til Black Future Month?...

My Name Was Never Frankenstein