WINNER - SAMUEL JOHNSON PRIZE 2014 • COSTA BOOK AWARD 2014
ABBEY'S BOOKSELLER PICK -----  MacDonald has been obsessed with the archaic traditions of falconry since early childhood, training small falcons and generally immersed in the fellowship of falconers for many years. When her beloved father dies unexpectedly, she is overwhelmed by loss and decides to take on the greatest challenge of all - to train a goshawk. In the process of building a rapport with her hawk, MacDonald learns what it truly is to be human through her association with the wildest and largest British raptor of all.
A lyrical and beautifully crafted meditation on grief, connection, wildness and control, it is also intertwined with her re-reading of T H White's little known book The Goshawk , which details the celebrated author's attempts to train such a bird himself. White and his mistakes, his writings and outsider status, all become essential to her own attempts to make sense of what has happened in losing her father.
I can't recommend this highly enough, and any fan of the ilk of Robert MacFarlane or Roger Deacon, will appreciate this fine book. Lindy
------
'In real life, goshawks resemble sparrowhawks the way leopards resemble housecats. Bigger, yes. But bulkier, bloodier, deadlier, scarier, and much, much harder to see. Birds of deep woodland, not gardens, they're the birdwatchers' dark grail.'
As a child Helen Macdonald was determined to become a falconer. She learned the arcane terminology and read all the classic books, including T. H. White's tortured masterpiece, The Goshawk, which describes White's struggle to train a hawk as a spiritual contest. When her father dies and she is knocked sideways by grief, she becomes obsessed with the idea of training her own goshawk. She buys Mabel for GBP800 on a Scottish quayside and takes her home to Cambridge. Then she fills the freezer with hawk food and unplugs the phone, ready to embark on the long, strange business of trying to train this wildest of animals.
'To train a hawk you must watch it like a hawk, and so gain the ability to predict what it will do next. Eventually you don't see the hawk's body language at all. You seem to feel what it feels. The hawk's apprehension becomes your own. As the days passed and I put myself in the hawk's wild mind to tame her, my humanity was burning away.'
Destined to be a classic of nature writing, H is for Hawk is a record of a spiritual journey - an unflinchingly honest account of Macdonald's struggle with grief during the difficult process of the hawk's taming and her own untaming. At the same time, it's a kaleidoscopic biography of the brilliant and troubled novelist T. H. White, best known for The Once and Future King. It's a book about memory, nature and nation, and how it might be possible to try to reconcile death with life and love. 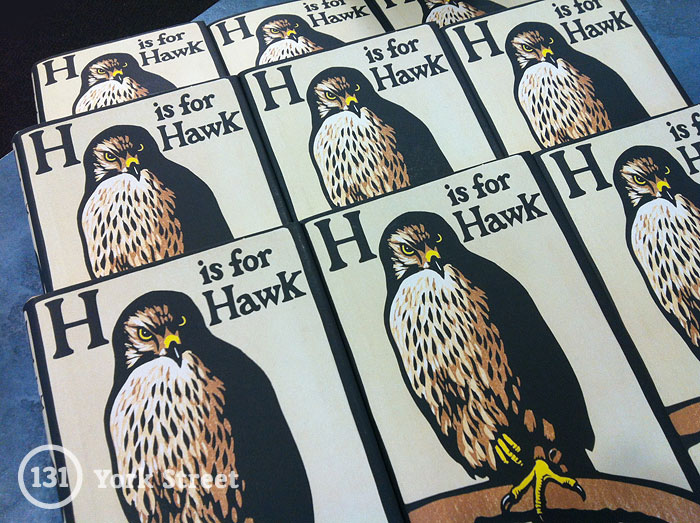 Helen Macdonald is a writer, poet, illustrator, historian and affiliate at the Department of History and Philosophy of Science at the University of Cambridge. Her books include Falcon (2006) and Shaler's Fish (2001).

Reviews for H is for Hawk

A soaring triumph. -- Christian House * Daily Telegraph * Mesmerising, decisive and devastating... Her description of Mabel in flight should be etched into every birdwatcher's field guide... Macdonald is a nature writer supreme, arguably the best practitioner of this art form writing today. -- Stuart Winter * Sunday Express * A talon-sharp memoir that will thrill and chill you to the bone... Fascinating. -- Craig Brown * Mail on Sunday * People talk about books that change your life. I loved the fact that this book does something much more valuable. It doesn't change anything. It leaves everything just where it was, only more so; more distinct, more itself. It opens your eyes. And it deepens what we have always known; that we live side by side with each other, as we do with the creatures around us. -- Laura Beatty * Caught by the River * Astounding. * Bookseller * Absorbing... This memoir is lit with flashes of that grace, a grace that sweeps down to the reader to hold her wrist tight with beautiful, terrible class. The discovery of the season. -- Erica Wagner * The Economist * A wondrous book of loss and recovery... When [Macdonald] matches her factual know-how...with her poet's eye, it is excellent... An exceptional book of twisted growth. -- Tim Dee * National * Cunningly plaited and - almost - devastating... It deserves to sell shedloads and win prizes, it is naturalist writing of that spectacular quality that is literature too. -- Angus Clarke * The Times * What she has achieved is a very rare thing in literature - a completely realistic account of a human relationship with animal consciousness... It is a soaring performance and Mabel is the star. -- John Carey * Sunday Times * One of the most eloquent accounts of bereavement you could hope to read... A grief memoir with wings. -- Caroline Sanderson * Bookseller * MacDonald's prose is poetic, forensic, yet often capable of quickening the pulse. Her lexicon...is vivid and joyous, soaring as freely as birds do. -- Benjamin Myers * New Scientist * It is a mark of Macdonald's achievement that so exultant a book can resolve itself in a sense of failure, yet leave the reader as uplifted as a raptor riding on a thermal. -- Philip Hoare * New Statesman * Nature-writing, but not as you know it. Astounding. * Bookseller * Captivating... There is a highly polished brilliance to her writing. The English-speaking world has an old passion for books about creatures and captivating companions ... Helen Macdonald looks set to revive the genre. -- Guardian * Mark Cocker * [Macdonald's] descriptive writing, startlingly and devilishly precise...is only the half of it. She has written her taming of Mabel like a thriller, slowly and carefully cranking the tension is that your stomach and heart leap queasily towards each other... Captivates. -- Rachel Cooke * Observer * I can't remember the last time a book made me feel so many different things in such quick succession. -- Rachel Cooke * Guardian * I'm convinced it's going to be an absolute classic of nature writing. -- Nick Barley * Guardian * H is for Hawk is a dazzling piece of work: deeply affecting, utterly fascinating and blazing with love and intelligence... The result is a deeply human work shot through...with intelligence and compassion... I will be surprised if a better book than H is for Hawk is published this year. -- Melissa Harrison * Financial Times * This beautiful book is at once heartfelt and clever in the way it mixes elegy with celebration: elegy for a father lost, celebration of a hawk found - and in the finding also a celebration of countryside, forbears of one kind and another, life-in-death. At a time of very distinguished writing about the relationship between human kind and the environment, it is immediately pre-eminent. -- Andrew Motion It just sings. I couldn't stop reading. -- Mark Haddon

Persepolis: The Story of a Childhood...

Cops, Drugs, Lawyer X and Me