ABBEY'S BOOKSELLER PICK ----- Light-hearted and good-hearted fun for the young-hearted! After a seriously arduous year we could all do with a breather and a laugh. Like most of Australia, when I first saw the 'bolognese video' I thought it was hilarious, followed closely by 'Who is this guy?' Well, Nat answers some of that here in a mix of memoir and comedic observations on all manner of things. His charm is his honesty, his good-nature and his willingness to call bullshit with pointed looks and humour. Getting to know yourself, be yourself and back yourself is the undertone. He is also sneakily helping a whole generation of young adults - fresh out of the nest - in being able to cook a decent and healthy meal, while they just thought they were simply being entertained! Craig Kirchner
-----
Nat's What I Reckon was the tattooed lockdown saviour we didn't know we needed, rescuing us from packet food, jar sauce and total boredom with his hilarious viral recipe videos that got us cooking at home like champions.
Now that we've cooked our way out of lockdown and are wondering what the hell to do next, our favourite ratbag is back - and he's ready to teach us more about life in this thoroughly unhelpful (but maybe actually kinda helpful?) self-help guide.
Nat's already shown us that jar sauce can get f*cked. But what else is sh*t - and what's actually not sh*t? Is it all as bad as we feel like it is most of the time?
No part of our weird world and strange behaviour is spared as our long-haired guru tells us what he reckons about it all - and amps up the flavour with some eye-watering stories from his early years before a sweary video about pasta sauce shot him to global fame.
With Nat's nine no-nonsense rules, you'll be on the road to being a better d*ckhead faster than you can say 'get in the bin' to jar sauce. And if you screw it up, it doesn't bloody Parramatta!
Features a small selection of Nat's favourite recipes, illustrated by Sydney artists Bunkwaa, Glenno and Onnie O'Leary. 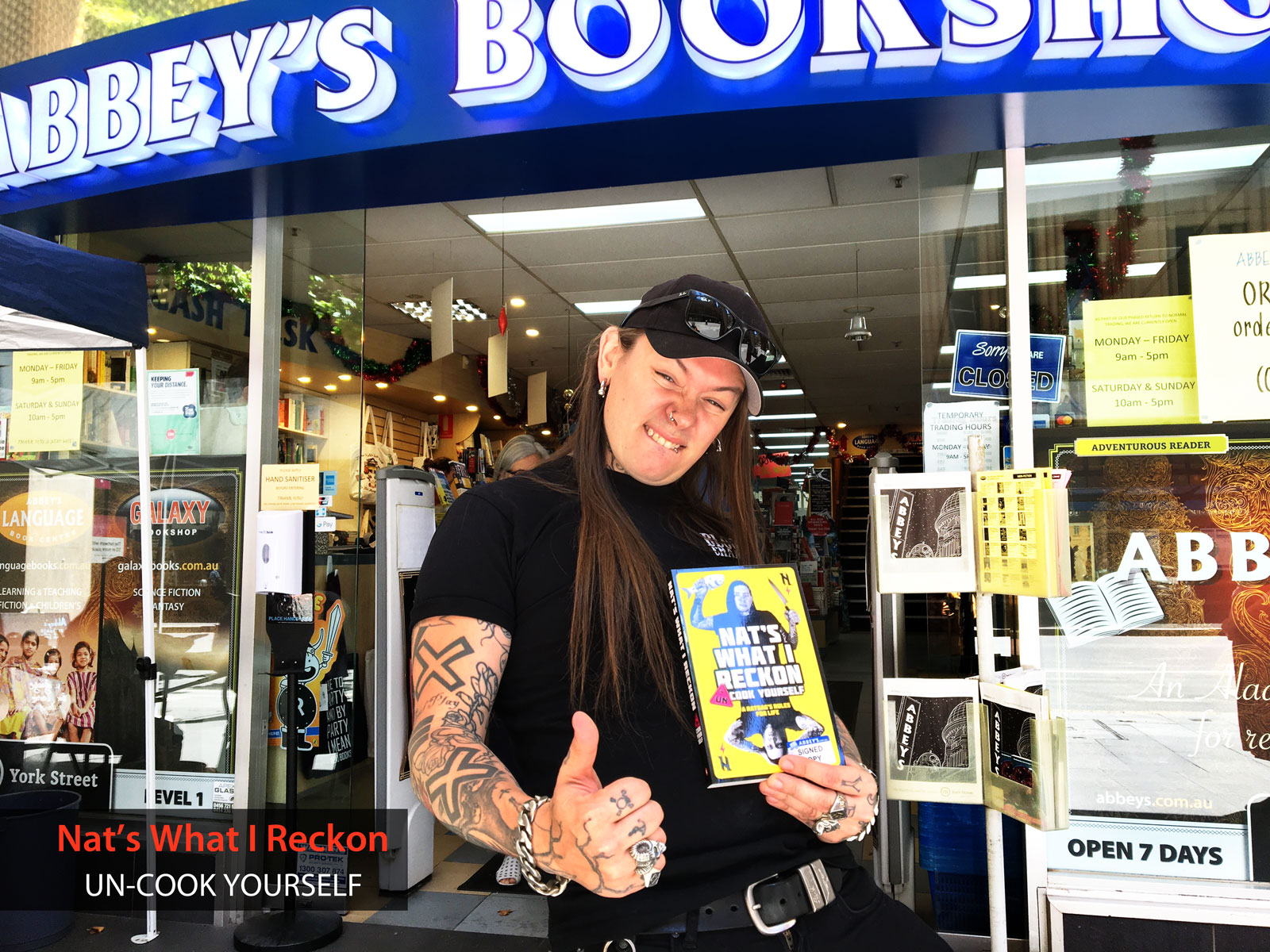 Content creator, comedian, rock musician, isolation cooking champion and mental health ambassador, Nat has been making videos as Nat’s What I Reckon for almost a decade. His hilarious social commentary has collected Nat a fast-growing, dedicated audience of over 2 million along the way, and his videos have clocked up more than 100 million views across all platforms. Finding entertainment everywhere from the weird to the pedestrian, Nat has taken the piss out of everything from trade shows and tattoo events to burnout festivals and exploring Area 51.

In response to the craziness he was seeing when COVID-19 crashed the party, Nat waged a war against processed food and launched a no-nonsense instructional video for one of his tried and true recipes. It struck a chord and sent views skyrocketing. This unlikely hero of lockdown got the internet cooking (and laughing) again. When he’s not filming, cooking or foraging for rosemary, Nat can often be found indulging his love of rock'n'roll and comedy, playing in various bands and stand-up rooms around Sydney.
By:   Nat's What I Reckon
Imprint:   Ebury Press
Country of Publication:   Australia
Dimensions:   Height: 234mm,  Width: 154mm,  Spine: 34mm
Weight:   372g
ISBN:   9781761040900
ISBN 10:   1761040901
Publication Date:   01 December 2020
Audience:   General/trade ,  ELT Advanced
Format:   Paperback
Publisher's Status:   Active

My year of darkness, and the light...

An Ancient Poet's Guide for an Age...

The Law of Success

You Can Do Anything Magic Skeleton...