ABBEY'S BOOKSELLER PICK ----- George Blake was given the longest jail sentence in British history for his spying activities. Blake grew up in the Netherlands, was a multi-linguist and a spy for Russia. Whilst being in prison in North Korea during the Korean war, Blake was disgusted by the Allied bombing of peasant villages – he approached the North Koreans and became one of the most important double agents in the Cold War. Sentenced to 41 years in England, Blake escaped from Wormwood Scrubs with a ladder made from knitting needles – his activities led to hundreds of agents being exposed – Kuper who managed to interview Blake tells his remarkable story of a man ruled by his convictions with few regrets. Highly readable a must for fans of Ben Macintyre and Le Carre. Greg Waldron

-----
Those people who were betrayed were not innocent people. They were no better nor worse than I am. It's all part of the intelligence world. If the man who turned me in came to my house today, I'd invite him to sit down and have a cup of tea.

George Blake was the last remaining Cold War spy. As a Senior Officer in the British Intelligence Service who was double agent for the Soviet Union, his actions had devastating consequences for Britain. Yet he was also one of the least known double agents, and remained unrepentant.

In 1961, Blake was sentenced to forty-two years imprisonment for betraying to the KGB all of the Western operations in which he was involved, and the names of hundreds of British agents working behind the Iron Curtain. This was the longest sentence for espionage ever to have been handed down by a British court.

On the surface, Blake was a charming, intelligent and engaging man, and most importantly, a seemingly committed patriot. Underneath, a ruthlessly efficient mole and key player in the infamous 'Berlin Tunnel' operation. This illuminating biography tracks Blake from humble beginnings as a teenage courier for the Dutch underground during the Second World War, to the sensational prison-break from Wormwood Scrubs that inspired Hitchcock to write screenplay.

Through a combination of personal interviews, research and unique access to Stasi records, journalist Simon Kuper unravels who Blake truly was, what he was capable of, and why he did it. 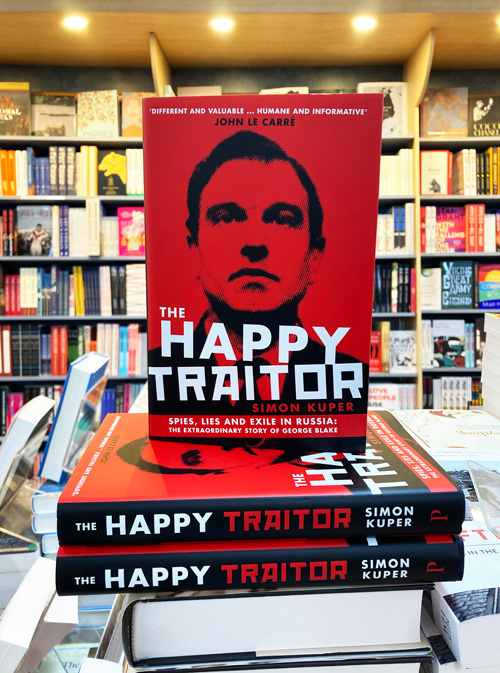 Simon Kuper is a British author and columnist for the Financial Times. Kuper was born in Uganda of South African parents in 1969, and moved to the Netherlands as a child. He studied History and German and attended Harvard University as a Kennedy Scholar. He has written for Observer, the Times and Guardian. His previous books include Soccernomics, Soccer Men, and Ajax, the Dutch, the War. He lives in Paris with his family.

Reviews for The Happy Traitor: Spies, Lies and Exile in Russia: The Extraordinary Story of George Blake

Kuper provides a different and valuable perspective, humane and informative. If the definition of a psychopath is someone who refuses to accept the consequences of his actions, does George fit the definition? There he sits, admitting it was all for nothing, but has no regrets. Or does he? -- John Le Carre Truly enthralling, gets under the skin, gives us a more nuanced sense of who Mr Blake - or is it Comrade Blake? - really was and what, if anything, actually motivated him. It's a deeply human read, wonderfully written, on the foibles of a fascinating, flawed, treacherous and sort of likeable character. -- Philippe Sands

The Origin of Empire

Rome from the Republic to Hadrian...

The Battle for Shaggy Ridge

America in Crisis and Renewal