WINNER - MILES FRANKLIN AWARD 2013 ----- WINNER - PRIME MINISTER'S LITERARY AWARD 2013 -----
As Elvis Costello sang, it's been a good year for de Kretser. First taking out The Big One (Miles Franklin Award 2013) and now scooping the 2013 Prime Minister's Literary Award for Fiction - although which Prime Minister we may never know.
Here's what the PM's Judges said:
"The two travellers in these gorgeously addictive parallel tales could not be more different: Laura the restless Australian and perpetually dissatisfied tourist, and Ravi the Sri Lankan, forced to become a refugee.
As they criss-cross the world and each others' paths, never quite escaping the ties of home, de Kretser's novel assembles an array of encounters and experiences for each of her travellers to raise questions that are droll, piquant, satirical, sometimes devastating. In prose of sparkling wit, she seduces, teases and challenges her readers into looking at their own assumptions about what it means to be on the move."
If you haven't already read this, it must now surely be near the top of your 'must read' list.
-----
A mesmerising literary novel, Questions of Travel charts two very different lives. Laura travels the world before returning to Sydney, where she works for a publisher of travel guides. Ravi dreams of being a tourist guide until he is driven from Sri Lanka by devastating events. Around these two superbly drawn characters, a double narrative assembles an enthralling array of people, places and stories - from Theo, whose life plays out in the long shadow of the past, to Hana, an Ethiopian woman determined to reinvent herself in Australia.
Award-winning author Michelle de Kretser illuminates travel, work and modern dreams in this brilliant evocation of the way we live now. Wonderfully written, Questions of Travel is an extraordinary work of imagination - a transformative, very funny and intensely moving novel. 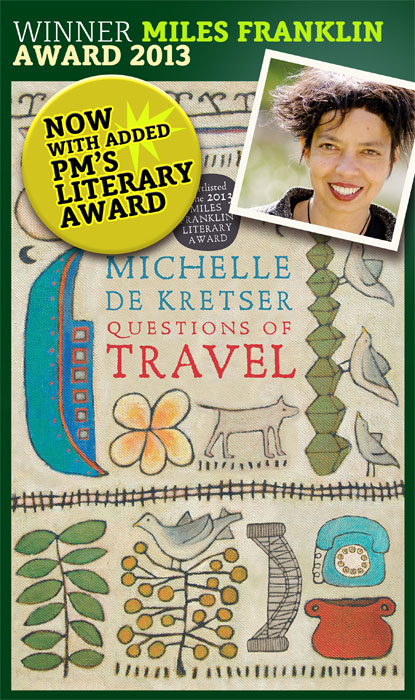 Clean Straw for Nothing and A Cartload...

All the Birds, Singing

A Woman Of The Future

The Time We Have Taken

The Glade Within The Grove