'A wonderfully assured and utterly riveting biography that captures not only the much-maligned Machiavelli, but also the spirit of his time and place. A monumental achievement.'  Jessie Childs, author of God's Traitors.

'A notorious fiend', 'generally odious', 'he seems hideous, and so he is.' Thanks to the invidious reputation of his most famous work, The Prince, Niccolo Machiavelli exerts a unique hold over the popular imagination. But was Machiavelli as sinister as he is often thought to be? Might he not have been an infinitely more sympathetic figure, prone to political missteps, professional failures and personal dramas?

Alexander Lee reveals the man behind the myth, following him from cradle to grave, from his father's penury and the abuse he suffered at a teacher's hands, to his marriage and his many affairs (with both men and women), to his political triumphs and, ultimately, his fall from grace and exile. In doing so, Lee uncovers hitherto unobserved connections between Machiavelli's life and thought. He also reveals the world through which Machiavelli moved: from the great halls of Renaissance Florence to the court of the Borgia pope, Alexander VI, from the dungeons of the Stinche prison to the Rucellai gardens, where he would begin on some of his last great works.

As much a portrait of an age as of a uniquely engaging man, Lee's gripping and definitive biography takes the reader into Machiavelli's world - and his work - more completely than ever before. 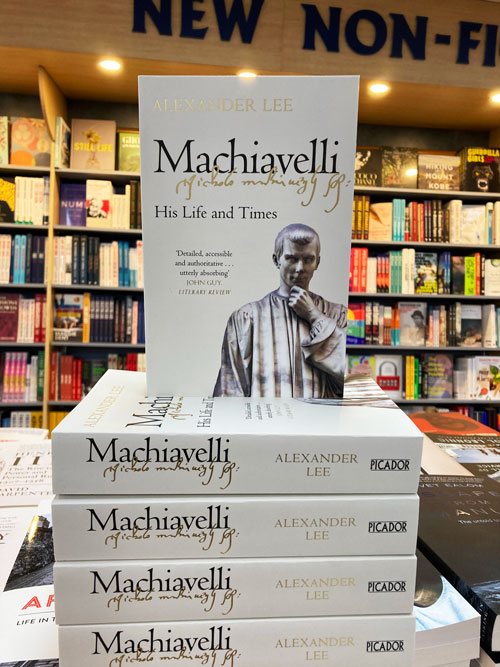 Alexander Lee is a research fellow at the University of Warwick. He is the author of four acclaimed books, most recently Humanism and Empire: The Imperial Ideal in Fourteenth-Century Italy. He writes a regular column for History Today, and has contributed articles on a wide variety of historical and cultural subjects to the Sunday Telegraph, the Wall Street Journal, the Guardian, the New Statesman, the Times Literary Supplement, and Dissent, and has frequently appeared on BBC television and radio, ITV, Central Television and Sky News. He lives in France.

Reviews for Machiavelli: His Life and Times

The result is a life of Machiavelli that must surely be definitive in its faithfulness to the man and his experience of his time . . . Lee presents a novel interpretation of his subject's thinking. -- John Gray * New Statesman * Detailed, accessible and authoritative . . . an utterly absorbing month-by-month, often day-by-day account of Machiavelli's life and career. -- John Guy * Literary Review * A fine new biography. -- Simon Heffer * Telegraph * A superb work of scholarship, securely grounded in the turbulent Italy of Machiavelli's day, and unflinchingly truthful . . . Lee retells the stories of plagues and brush-offs, of brothels, betrayals and massacres, in a brisk and compelling style. -- Ferdinand Mount * Prospect * [A] weighty and impressively detailed biography -- Michael Prodger * The Times * [T]he definitive book on Machiavelli -- Christopher Hart * Sunday Times * A wonderfully assured and utterly riveting biography that captures not only the much-maligned Machiavelli, but also the spirit of his time and place. A monumental achievement. -- Jessie Childs, author of <i>God's Traitors</i> Alexander Lee's Machiavelli: His Life and Times sets a wholly new standard for English-language biographies of the Florentine thinker, synthesising recent academic research and placing his subject in a vividly described context of Renaissance society and everyday life -- Tony Barber * Financial Times * His life and times are presented in their complex, contradictory fullness, as is Machiavelli himself . . . Lee is to be especially applauded for his even-handed treatment of a controversial historical figure. -- Joanne Paul * BBC History Magazine * From Lee's magisterial biography, rich in detail and light on speculation, the writer emerges as a flawed but markedly fascinating individual -- Nicholas Cranfield * Church Times * [A] fine new biography ... Lee tells his story with verve. -- Lauro Martines * Times Literary Supplement * Immensely readable . . . Machiavelli emerges from Lee's account as one of the Italian Renaissance's greatest figures. * Financial Times 'Books of the Summer' * Such is its hefty size that I set out to read Alexander Lee's Machiavelli at a lick. However, it is so rich in granular detail - not just about the surprisingly hapless man himself, but about Florentine society and the wars that scudded across Renaissance Italy - that I was forced to take it slowly, and was rewarded handsomely. -- Michael Prodger * New Statesman 'Books of the Year' * Lee's exhaustive, balanced and immensely readable work, sets a wholly new standard for English-language biographies of Machiavelli. -- Tony Barber * Financial Times 'Books of the Year' *

An Independent Woman in the Age...

A Noble Way To Go

Deaths of English, Scots and Irish...

Native Nations and the United States...

Empire, Slavery and the Great Port...