ABBEY'S BOOKSELLER PICK ----- We all know of Roy and HG, and this book will be for the fans! It is John Doyle writing about a year in the early life of Roy Slaven (which mirrors Doyle's life in important ways) and one of Roy's closest friends is John Doyle, so through Roy's narration their stories intersect. (Don't try to make sense of it! Just go with the flow!) It is Lithgow in 1967, and Roy lives with his Mum (his father's taken off shearing and effectively disappeared - much to their unspoken relief). He attends the local Catholic boy's school, is making his mark in a number of sports, and generally gets up to the sort of harmless mischief a good-hearted young fella might. The joy in reading this book is the loving evocation of a past time and place and how it catches a sort of innocence and boyish self-assurance, all with the iconic dry style of this great Australian humorist.  Lindy

-----
Who is Rampaging Roy Slaven? An Australian icon, a raconteur, an athlete of unsurpassable - and some may say improbable - sporting feats. Whether training Rooting King to another Melbourne Cup victory, commentating the Olympics or hobnobbing with the country's upper crust, Rampaging Roy Slaven has lived an extraordinary life.

But even some of the greatest men come from humble beginnings. Before he shot to fame as Australia's most talented sportsman, he was just another kid in Lithgow, trying to avoid Brother Connor's strap and garner the attention of Susan Morgan from the local Catholic girls school.

Blessed follows one year in the life of the boy who would become Rampaging Roy Slaven, a boy who, even at the age of fifteen, knew he was destined for greatness – but had to get through high school first. 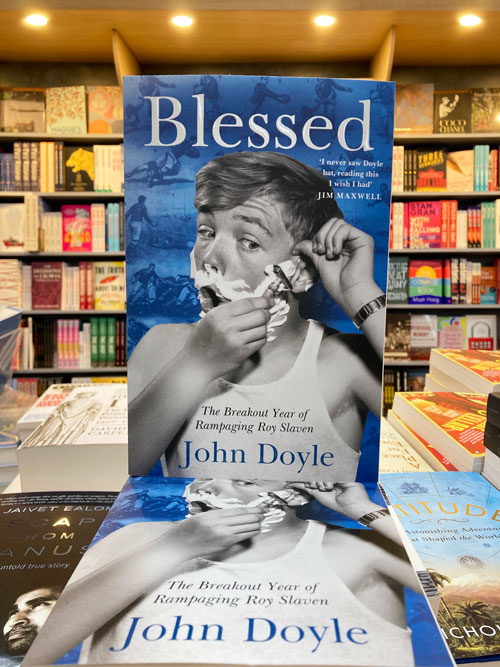 John Doyle is one of Australia's finest writers for stage and screen. His work spans the theatrical success of The Pig Iron People for the Sydney Theatre Company and Vere (Faith) for the State Theatre Company of South Australia, to the small screen acclaim of series such as Changi, Marking Time and Two Men and a Tinnie for the ABC. He created the character of Roy Slaven in 1985, for ABC radio station Triple J. Since 1986, Roy has appeared alongside H G Nelson on various television series, including Club Buggery, The Channel Nine Show, Win Roy and H G's Money, The Dream, The Monday Dump, The Ice Dream, The Cream, The Dream in Athens and The Memphis Trousers and the long-running Sunday afternoon radio sports program This Sporting Life on Triple J. In 2010, John was made a Member of the Order of Australia for his services to entertainment and as a supporter of charitable organisations such as the United Nations Children's Fund in Australia. John is Patron and a life governor of Autism Spectrum Australia.

What Are We Even Doing With Our...

The Most Honest Children's Book...

My First Little Book of Intersectional...

Practical Wisdom for Your Favorite...