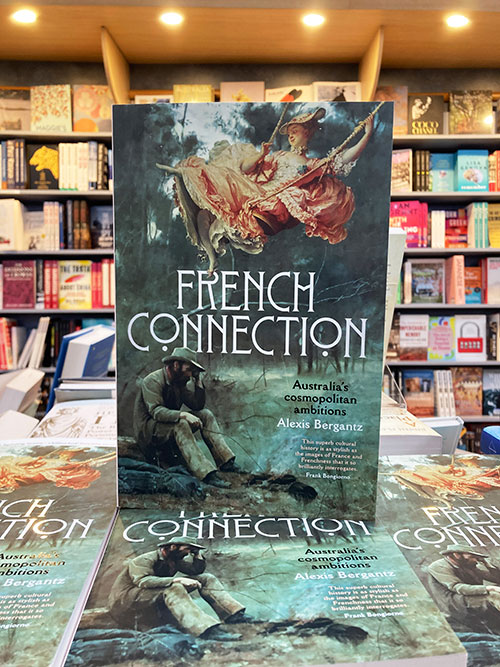 The French have been integral to the Australian story since European colonisation. Escaped convicts from New Caledonia, wool buyers from Lille, Roubaix and Tourcoing, gold-diggers, artisans, teachers and cafe owners, they were not always the creme de la creme.

French Connection provides a fascinating insight into how the culture of Frenchness influenced a new nation anxious to prove itself to the world. What did Australian colonists see when they looked to France? How much did the French presence in the Pacific loom over such ideas? And what did the French in Australia themselves make of it all?

Alexis Bergantz uncovers the little known and often surprising history of the French in nineteenth-century Australia and their role in creating a more connected and cosmopolitan nation.

'In the late 1800s, for Australians, France was the land of haute cuisine, haute couture and high culture, but also a country of dangerous revolutionaries and menacing colonialists. Alexis Bergantz's well-researched and very engagingly written history of the French in Australia offers revealing portraits of individual lives, deftly assesses the way the two societies saw each other, and explains how the French helped create modern Australia.  - Robert Aldrich, University of Sydney

'Contributes significantly to our understanding of the making of Australia and of Australian mythology and history.' - Iain McCalman

'In French Connection, Alexis Bergantz transcends 'contribution' or 'ethnic' history in explaining how Frenchness in Australia was among the ingredients of an antipodean culture that has been more cosmopolitan for much longer than most imagine. This superb cultural history is as stylish as the images of France and Frenchness that it so brilliantly interrogates.' - Frank Bongiorno AM, Professor of History, The Australian National University

'French Connections is a lively, spirited and historically informed account of the history and legacy of French-Australian relations. Bergantz deftly weaves together stories of individuals and groups who together paint an intricate portrait of the connections between the two nations. The engaging snapshots rest upon profound and rigorous historical research. French Connections is a significant contribution to this important historiography and will be essential reading for those interested in 'Frenchness' and 'Australianness'. - Natalie Edwards, University of Adelaide

'With insight, wit and humour, Alexis Bergantz explores the multi-layered history of the Australian Francophilia and Francophobia detailing how, since the earliest days of English settlement, the French in Australia, and from afar, have played a vital role in shaping the Australian identity. An absorbing read! - Margaret Sankey, University of Sydney

Twelve Statues That Made History...

America in the Time of Covid

Capital of Empire, Crucible of Europe...